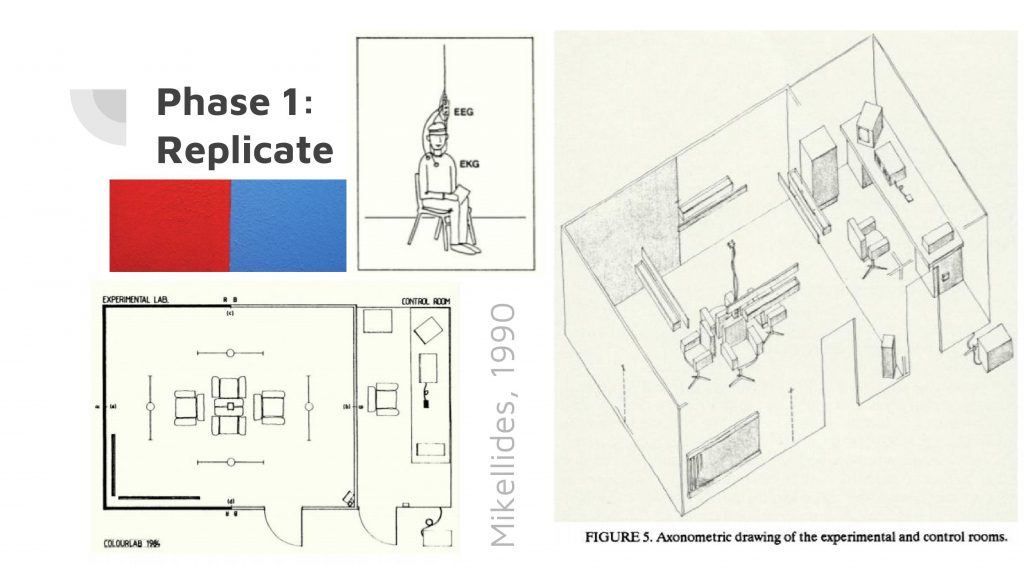 This research is centred around how people react physiologically to different colours in a virtual reality environment, the main relevant literature can be divided into two main categories methodology and theoretical. This question can be divided into three main elements, those are: physiological responses, virtual reality environments and the effect of different colours.

Examining how people react to virtual reality stimuli has been explored since virtual reality became available, but in recent years more so because of the advances in virtual reality equipment. To collect participant’s reactions to different stimuli many researchers use physiological sensors (Wiederhold, 2002 and Garau, 2005) rather than surveys, some use both to compare the results (Koelstra, 2012) while others rely solely on surveys.

Colours and their impact on our emotions and physiological state have long been explored in a range of fields especially in art and interior architecture. But rarely colours’ effect in a virtual reality environment has been explored in recent years. The effects of nature and if “fake” virtual nature (de Kort, 2006 and Valtchanov, 2010) has the same restorative and calming effects that exposure to real nature has (Berto 2014) has been explored in two papers published four years apart. The method used to test this hypothesis was to constantly record physiological signals of heart rate and skin conductance levels while participants went through a stress inducing exercise and after the experience were exposed to natural scenes projected onto a large screen to increase immersion (de Kort, 2006). A very similar method was used in Restorative Effects of virtual nature setting (Valtchanov, 2010) but rather than using projections, participants were exposed to a virtual reality environment of a virtual forest, in Ocelot the methodology is similar to the previous studies except that participants will not be exposed to a stress inducing task prior to entering the coloured room variations, therefore not testing how the different colours calm or agitate the participants further but rather seeing if and how different colours cause a physiological change in the participant. Although from these studies the preferred physiological responses to monitor were heart rate and skin conductance, this is due to their link to detect and represent stress in participants “(Skin conductance sensor measuring the resistance between electrodes) This resistance decreases due to an increase of perspiration, which usually occurs when one is experiencing emotions such as stress or surprise” (Koelstra, 2012) the use of these specific sensors is a common thread found in other research testing physiological responses to virtual stimuli.

The concept of exposure to colour changing the state of mind of a person is something artist James Turrell looks at in depth in his coloured light installations especially the Ganzfelds series were whole rooms are filled with coloured light, blurring the edges of the space, “My work has no object, no image and no focus. With no object, no image and no focus, what are you looking at? You are looking at you looking. What is important to me is to create an experience of wordless thought.” (Turrell, 2017). Turrell takes colour in architecture to the extreme filling the whole space with that coloured light, guiding the audience to a specific reaction but letting each participant have their own view of the space, therefore not testing if they are actually getting the artists desired reaction to the space. Mikellides tests the effect that warm colours have versus cold colours with a method similar to Turrell’s famous installations. To test the difference warm and cold colours have on human physiological state (Gerald, 1958), a room was painted half red (R) and half blue(B), red representing warm colours and blue cold colours, all surfaces in the room were painted in these colours. The participants were then exposed to each side of the room, all R, RB, BR and all B, for a set time while physiological responses were measured. This kind of experiment has also been done previously by R.M. Gerald, 1958 but using coloured light directly on the participant’s eyes. In the Ocelot research project will adapt this procedure to a modern virtual reality experiment. In Colour psychology and colour therapy: Caveat emptor (O’Connor, 2011) the beliefs and theories surrounding colour are compared and analysed, providing good summary of foundation knowledge on the literature of colour theory.

The equipment that will be used for this research is the BITalino (r)evolution Board Kit, a biomedical data acquisition dev board with cable extensions to snap on electrodes to the end for easy application . This is due to its range to measure multiple physiological signals at once with relatively good accuracy. Other sensors were tested but the BITalino proved to the most effective. The chosen physiological responses that will be measured are ECG and EDA since they are the most responsive and easier to analyse the signal produced. These two sensors are also the ones used for multiple other experiments in projects of similar nature.

Electrocardiography (ECG) refers to the measurement of electrical impulses passing through the heart; it measures heart rate. The sensors are usually placed on the chest, but can also be placed on the hands. For this experiment, they will be placed on the left side of upper chest. ECG uses electrodes to gauge the frequency of electrical impulses generated through the heart, measuring in units in microvolts. External bumping of the sensors will affect the data recorded.

Skin Conductance (SC) also known as galvanic skin response (GSR) or Electrodermal activity (EDA) modulates the amount of sweat secretion from sweat glands. These terms refer to the variation of the electrical properties of the skin in response to sweat secretion. It measures arousal. The higher the arousal, the higher the skin conductance. Both positive (“happy” or “joyful”) and negative (“threatening” or “saddening”) stimuli can result in an increase in arousal–and in an increase in skin conductance.

Although this physiological response happens on the whole skin surface of the body, a sensitive analysis can only be measured from the hands or feet. In these places there is a high density of the eccrine sweat glands, which are known to be responsive to emotional and other psychological stimuli. For this experiment EDA sensors will be placed on medial phalange of the index and middle fingers of the non-dominant hand. It is measured by applying a low constant voltage, the change in skin conductance can be measured non-invasively. High activity can affect the conductance as high physical activity will cause the body to respond with sweating to cool down.